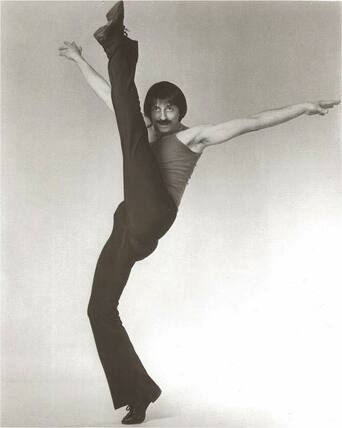 Charles "Chuck" Kelley taught dance in New York City since the late 1960s, being associated with the June Taylor School of Dance, Harkness Ballet, Farnsworth and Hauer Studios, New York Centre of Dance and Broadway Dance Center. He had an international reputation as a "teacher's teacher." His students, who numbered in the thousands, have gone on to careers in film, TV, Broadway musicals, and as dance teachers. Chuck had the distinction of being recognized for his contributions in the art of teaching dance by every major dance teacher association in America.

He taught thousands of dancers and teachers over the years and was represented on the Broadway stage with dancers in every major musical comedy, as well as dancers in every phase of theatre including bus and truck tours, stock productions, dinner theatres, television, movies and casino revues in Reno, Las Vegas, Atlantic City, Monte Carlo, etc. He taught teachers across America and in foreign countries who use his technical material in Tap, Jazz and Acrobatics/Tumbling.

He taught for every major and minor dance teacher's organization in America (doing his first convention at age 14) including NADAA, DANCE EDUCATORS OF AMERICA, DANCE MASTERS OF AMERICA, PDTA. DANCE OLYMPUS, DANCE TEACHERS CLUB OF BOSTON, DANCE MAKERS, DANCE CARAVAN BLUE, etc. He also taught for dance teacher organizations in Canada and Mexico and conducted master classes and workshops for hundreds of dance studios and colleges in this country, as well as in France, Italy, Germany, the Bahamas, Jamaica and Hawaii. He was on the 25th Anniversary program of the International Summer Academy of Dance in Koln, Germany and was professor of dance for the University of Quebec at Chicoutumi in Canada.

Mr. Kelley's former professional career included work in stock productions, bus and truck tours, National tours, Broadway Musicals, Television, concert work and night club productions. He studied with the foremost teachers of his time, i.e. Matt Mattox, John Plaza, Jack Stanly, Paul Draper, Paul Haarkon, Leon Danieleon, Frank Wagner, Claude Thompson, Aubrey Hitchens, etc.
​
He and his students appeared in the film "I Love New York" produced by the state of New York to promote tourism for the section on New York City as the Dance Capitol of the World.
​
Mr. Kelley has been honored by Dance Educators of America (1985), Dance Teachers Club of Boston (1988), Dance Masters of America (1989) and the National Association of Dance and Affiliated Artists (1990) for his contributions to the art of teaching dance. One of the only teacher in America to be so honored by all of these major associations.

​Miss Gina started studying with Mr. Kelley at the age of nine at the Farnsworth and Hauer Studios in New York City and continued to studying with him throughout the years.  She credits him with being her mentor and instilling in her the  passion for teaching the art of dance and carrying on his legacy. She will continue to keep his spirit alive by teaching his techniques and passing on his extensive knowledge of dance.